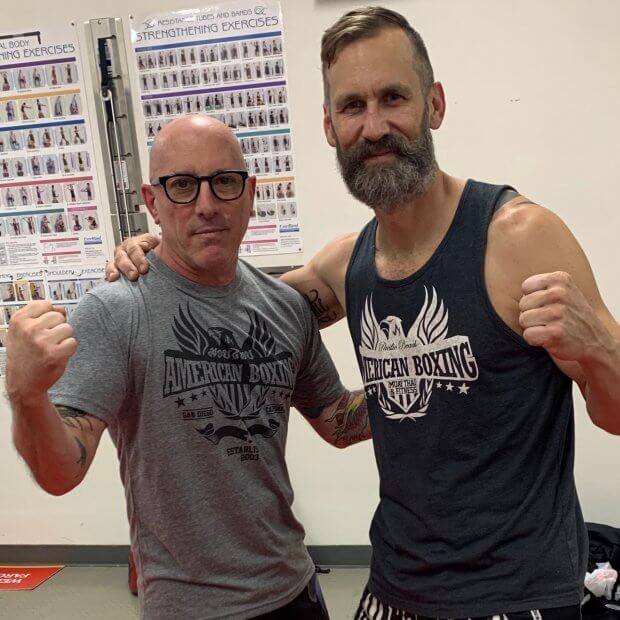 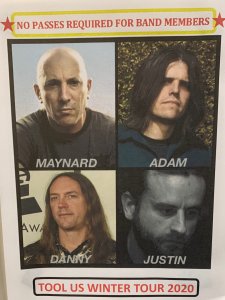 Friday January 10th 2020, I was fortunate enough to pass some of my knowledge onto Maynard James Keenan the lead singer of the rock bands “Tool”, “A Perfect Circle” and “Puscifer”.  December 2019 I got the call that Maynard wanted to learn and train Muay Thai while he was in San Diego.

Maynard and I actually met more than 10 years ago, after a Tool show, introduced by one of my Muay Thai students and friends in common. I was more a fly-on-the-wall at that point, just hanging out with a few people in his private room after a show at this same venue, talking business. Maynard and I spoke briefly about a back injury that prevented him from training BJJ (Brazilian Jiu Jitsu) but not much else except some humorous banter over a picture.

Hearing that he was no longer training combat sports was disappointing and exciting at the same time, since I have nearly 20 years of Jiu Jitsu and Muay Thai experience.  The joint and back problems typically suffered by many long term BJJ practitioners simply do not happen to Muay Thai practitioners with proper instruction. So, I was excited to turn Maynard onto Muay Thai since I knew his back problem would be less of an issue striking, than grappling.

However, right then and there, I could tell he wasn’t in a place to welcome a new combat sport into his life from a complete stranger.ha  So, after our quick chat, we shook hands and I was on my way.  It never left my mind that I knew Muay Thai was a great option for him with his type of injury, so, when I got the call last month, to train MJK, I was very excited to help bring my sport, fitness tool and self defense rooted in Buddhism, one step closer to “the man” and possibly the masses that follow him.

So, my girlfriend who had never heard of Tool nor been to a Rock concert before (at 37 years old) came with me to train Maynard and watch the show.  As we pulled up to the back of SDSU Villejas Arena where the band RVs and a row of Semi Trucks sat full of gear, things immediately began to feel surreal.  Pulling up it was completely obvious that we totally fit in because nothing says “Muay Thai badass” or “Rock Star” like rolling up in a white Prius with blinged out license plates.haha

Kru Dave aka Kru B.Real waiting for Maynard in the training room.

We parked right by the large ominous roll-up door were we were met by Maynard’s head of security who handed us our passes and walked us into the arena, straight to the room where we would be training.  My lady was then escorted to a waiting area with food and I simply wandered around a bit back stage waiting for Tool to finish soundcheck.
While cruising around I may or may not have gotten in a little trouble for taking some harmless pictures and not having my back stage pass on me (ha), so i went back into the training room to wait for MJK to arrive.
After maybe 15 minutes or so, the door opened…
And I am here to tell all of you, when Maynard James Keenan walked in the room it was crazy!
We both acted like completely normal people, said hello and shook hands 🤯 haha

We talked a bit as he warmed up… I asked him to shadow box for me since he had already trained a handful of times with various MMA, kickboxing and I think 1 other Muay Thai trainer…then we started working some drills.

We trained and BS’d for about 2 hours and had a good time.   Meeting someone with a similar personality and sense of humor that enjoys crossing over the edge, in the interest of humor as much as I do is always fun 😬. 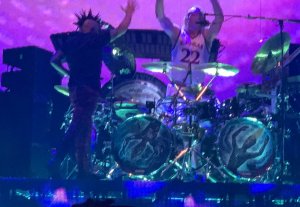 NO PHOTOGRAPHY ALLOWED!!! Unless of course everyone has been good girls and boys the ENTIRE SHOW, then you “might” get a treat at the end!

The Rock Star Lesson to Learn:

What I really wanted to share with everyone was my impression of Maynard as a “student”.

Maynard James Keenan is one of the biggest rock stars on earth…yet he acted humble and disciplined, taking constructive criticism with a seemingly open mind.

I posted this story and it excited me because I want people out there to realize, the path to growth is usually uncomfortable and takes a leap of faith.  Finding a coach/mentor in anything isn’t about finding someone who is your best friend, enables your excuses and/or makes you feel warm and fuzzy…  It is about finding someone who knows the process and tells you “how to get where you want to be”!  That is usually uncomfortable for most because it means you’ve done/do things “wrong” and it is pointed out.  It is especially difficult as we age to trust someone and subjugate yourself.  But like Nike used to tell us “Just Do It!” I promise you won’t regret it.

So, if you want to be one of the biggest “rock stars” in the world or the biggest rock star at work, or a rock star of a parent etc etc, you’ve gotta embrace the process with open ears, eyes and humility.

So, like I said before, we shared more than a few humorous instances while training. ..
I typically ask people I train what their ethnicity is…I like to find commonalities within the groups.
Here’s a Rated PG “back and forth” that had me laughing pretty good.

Me: So, what’s your ethnicity?

Me: Oh nice, that makes a good fighter…

MJK: I’m more of a complainer.

P.S.
Everyone is also asking me how much he paid me…
Well, lets just say, I am STILL waiting for my select bottle/s of wine to arrive.