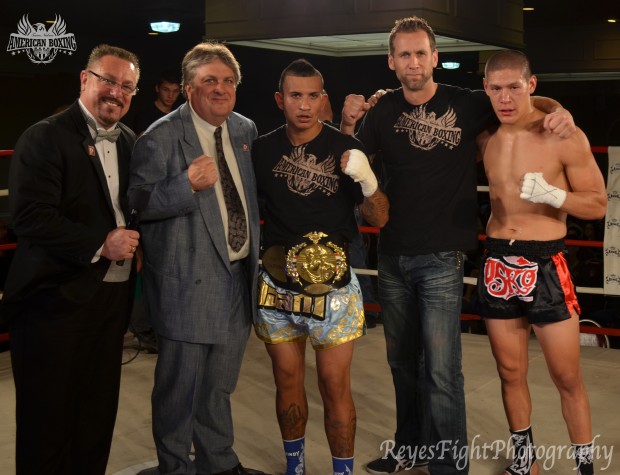 On November 11, 2012 at The Plaza Hotel and Casino in Las Vegas Nevada, WCK Muay Thai put on it’s annual China vs. USA event.  Team WuLinFeng vs. Team WCK.  An exciting event with great fights featuring talent from Ukraine, Mexico, China and of course the USA.

Undefeated fighter Francisco “daMilkman” Garcia vs. “Dynamite” David Pacheco was one of the most anticipated fights of the night.  In April 2012, Garcia and Pacheco faced off at the WCK event at Pala Indian Reservation.  The winner, Francisco Garcia by TKO Round 2 giving Pacheco the only loss on his record!  After the fight, Muay Thai Kickboxing promoter Dennis Warner was quoted as saying “We have to do that again!  Next time with cameras rolling!”

That night Garcia sustained a hand injury in the fight and was laid off for the next 4 months while Pacheco went of a multiple fight winning streak including a win securing him the IAMTF Welterweight California Muay Thai Title.

Pacheco wanting to get back his only loss, and Garcia wanting the Title and belt he felt should be his, this rematch was bathing in anticipation!

Promoter Dennis Warner’s next event with “cameras rolling” was this recent WCK China vs. USA event.  An exciting event and fight it was!

A synopsis of the fight: Round 1 both fighters came out dropping bombs! Garcia dropped Pacheco for an 8 count and from there forward Garcia seemed to continued to gain momentum.  Blood on the face of Pacheco became obvious in Round 2 as Garcia began to really control the action, sweeping, kicking and laying hands on Pacheco seemingly at will.  Round 3 saw more of the same with a good pace being maintained by both well conditioned fighters.  Round 4 saw Pacheco come out knowing he needed the KO!  Attacking Garcia with strong punches and knees however, it was just too late and Garcia was too strong.  Pacheco could not maintain the pace and Garcia responded.

Francisco can be seen most nights training in Boxing and Muay Thai classes with other students at all levels, helping and growing as a teacher, martial artist and person