Here is our response to you Jacobs “review”.

Jacob: So, I attended this quite a while ago, I started in the august of 2017 as I really didn’t have the best experience with their 101 class that took place on Saturdays.

Us: Actually Jacob, you are off by 1 year, you enrolled in 2018 (see photo), but hey, what do facts matter in reviews that contradict facts 😉 And thanks for sharing that all you really attended was Saturday’s class… a “Kickboxing 101” class that is described as an intro to Muay Thai for people to be “introduced” to the “kickboxing” side of Muay Thai fundamentals and to develop the necessary fitness level to actually perform Muay Thai techniques safely. 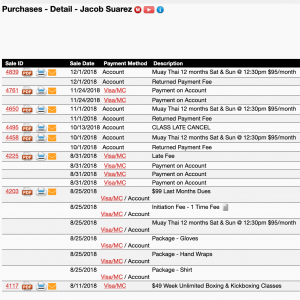 Jacob: Now with having more experience with other gyms and just recently finding the perfect gym for me I can really reflect and look back on this experience with a better understanding of the atmosphere of this particular business.

Us: You went to other gyms, but only chose to “review” ours and your new gym? That is odd.  So, you learned from us and “other gyms”, where we put in the real work of teaching you from the ground up? Then, you went to a gym, with skills, fitness and apparently one of our Tshirts, they kissed your butt and you are now happy, is that what you are telling us?  Cuz that is pretty much what it sounds like.  It also sounds a bit like someone may have put you up to this “review”.

Jacob: Kru Dave, I think gets a lot of slack for being “arrogant” even from the beginning I believed this to be BS. I took it more as the style in which he has adopted to motivate his students both physically and mentally. I think many people wouldn’t come back after one session if they’ve never experienced any kind of boot camp type atmosphere as that is what I think it resembles.

Us: Arrogant? No.  An “asshole”, sometimes, for calling out shady trainers, shady gyms, shady former members, for lying and fake reviews, trying to hurt a family business that is run with passion and integrity, not to mention is twice as old as any other Muay Thai and boxing program in San Diego.
Watch any post fight interview or speak with any opponent of any American Boxing fighter, American Boxing, Dave and his athletes are all highly respected and known for their humility and kindness.

Jacob: Anyways the class itself that I did was a lot of bag work and cardio, never sparred or really has mitt work.

Us: Again Jacob, it was a “kickboxing 101” class, “intro to Muay Thai”,  Fitness and fundamentals.  How did you get confused that it would ever be anything else?  If you wanted something else, did you consider coming to other classes like “sparring class”?  And fyi, no-one EVER gets stuck on a bag in my classes unless they cannot control themselves or follow directions and the inability puts others or themselves, in danger.  Which one were you?

Jacob: It was really mostly circuit training, I found this to be a disadvantage for the students, especially those like me who wanted to take the next step but were still learning.

Us: You took 11 classes over like 6 months, did you maybe think that, just “maybe” you missed the good stuff?  Or maybe that you were so inconsistent (1 time a week for 5 weeks was I believe your most consistent) that you never got good enough to progress?  #Justsaying

Jacob: Nevertheless, I found this gym to be a stepping stone for me personally, I got in decent shape and learned some fundamentals but after a year, so felt it time for me to go and find another place.

Us: “A year”?  You mean 11 classes over 6 months right?  And you didn’t pay your dues and you were about as inconsistent as possible. I’m glad we could be your “stepping stone” Jacob. Lol

Jacob: Just before I left there was talks of moving the gym so I hope the new place is just as spacious as the last, and hopefully the curriculum for each class level is a bit different now. Cheers

Us: You took the same class 9 times and expected something different. You understand how that looks right? 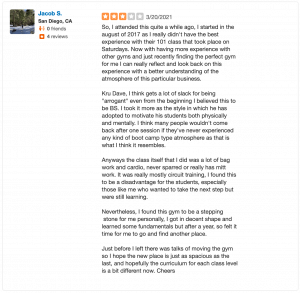 Jacob here can’t seem to tell the truth and feels like damaging our reputation, with lies and manipulations. Does this somehow makes him feel like an important person? I wonder if he knows how this really makes him look?

Jacob here is very similar to the handful of actual people that write less than stellar reviews.
Here are the commonalities:
1) They owe money (most common). They trained and didn’t pay.
2) Their personalities were not a good match (and like you can see from Jacobs admissions, he attended a number of gyms in San Diego) Was it us or is it Jacob? He states he has found a place he loves, which is GREAT! However, here is how that works.

Us and other gyms teach someone like Jacob all of our technique and build him up. Jacob has no sense of loyalty and refuses to put in the time and work as everyone else does, so he goes to a gym that sees that they do not have to teach Jacob anything! Instead, they now have a student in class that makes everyone who visits, think that their gym is where Jacob learned. This trainer, kisses Jacobs butt because he sees Jacobs value in making him look good to newbies. Then, that trainer asks Jacob to write a Yelp review on the old gym gym that has the most credibility over any Muay Thai gym in San Diego, easily. Jacob then makes the other gym look bad and his new gym look AWESOME!  This new gym immediately looks better to someone who doesn’t know any better.

This behavior is VERY COMMON, in Brazil.  They have a name for these people, “Creonte”, and it is not a good thing.  Back stabbing and going from gym to gym to just take and take.  Only difference is, legitimate academies would never allow this type of person into their school.  Only a gym trying to make a name for themselves without concern for respect or honor, would allow this type of person in their house.

Jacob chose the classes he attended and everyone can see the class name is kickboxing 101, how his choices are our fault or a reflection on our quality is unclear unless you look at someone telling him to do this.

American Boxing has competed in Muay Thai against every legitimate Muay Thai and MMA gym in this town, including Jacob’s current gym.  No disrespect intended, but we have beaten them all in Muay Thai competition…old gyms and new gyms…for nearly 20 years, we have never lost. This is simply a fact…and a proud one at that.  Again, all the respect in the world to our opponents, for putting themselves out there to learn and grow, like we did for many years (driving up to LA where actual Thai Champions have been teaching for decades), before the explosion of “Muay Thai” gyms in San Diego.  However, if you insist on comparing their programs to ours, there is only 1 measure of legitimate Muay Thai and that happens “in the ring”.