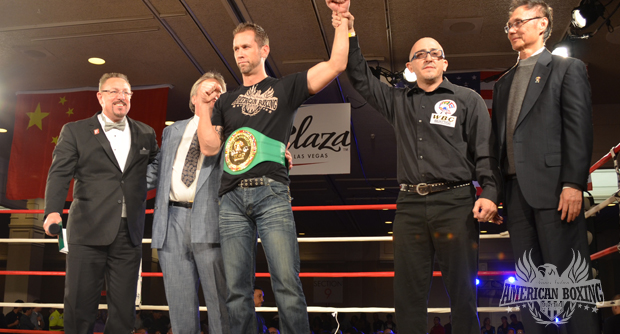 Looking for a unique and fun way to reach your fitness goals?  Want to level up your combat sports technique, BIG TIME? 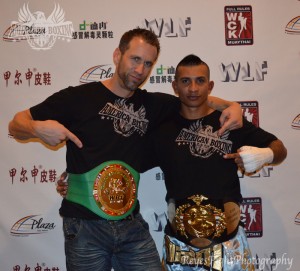 Kru Dave Nielsen is a highly observant and very technical Fitness Trainer, 7X Undefeated Muay Thai Champion and Submission Wrestling Champion with a personality to keep you engaged and entertained as he shows you the path to winning at life!  Let Dave’s experience in the ring, at the gym and in life, help you learn the right way, the first time. As a Champion, from champions that produces champions, his technique is inarguable.  His fitness mentors, formal fitness education and diverse clients over the past 20 years gives him knowledge, most trainers simply do not possess.  Remember, this is not a part time job for Coach Dave…this is his only, Full-Time job, for the past 20 years…to train people, to reach goals!

Coach Dave has produced numerous Champions in Muay Thai and Jiu Jitsu/Grappling that have competed in Americas top promotions such as Lion Fight, WCK Muay Thai, Glory Kickboxing, Grapplers Quest, Best of The West, The Pan Ams and more!

Dave grew up a three sport athlete (football, basketball, baseball).  However, he actually prefers “playing” over “watching” sports on TV with one exception, Boxing.  Sugar Ray Leonard, Pernell “Sweetpea” Whittaker, Roy Jones Jr. and especially “Iron” Mike Tyson captured his attention from a young age.  Dave watched these boxers growing up, side by side with his father every chance he had.

In 1999 Dave left his home in the Pacific North West with a guitar and his dog, to play music in Los Angeles. His future LA home, fell thru and since quitting was never an option, Dave kept driving to San Diego where he bought a surf board and never looked back.

After a year in San Diego, Dave established residency and began putting himself through college with a law degree in mind. In 2000 Dave began training training Muay Thai and No-Gi Jiu Jitsu in a professional setting, having his first fight and beginning an impressive undefeated run after just 3 months of training.

After 4 years of full-time college including Summers, Dave had earned degrees in Political Science and Business Administration with honors. As a result, he was accepted to study Law at UCLA.  Dave passed on the acceptance to study Law at UCLA, in order to pursue his new found love of Thai Boxing.  In 2002 Dave became a certified fitness professional through the National Academy of Sports Medicine and shortly after, in 2003 Coach Dave started American Boxing and Fitness.

With his comprehensive knowledge of Muay Thai take-downs, striking and submissions, Kru Dave has even had his expertise called on as an Expert Muay Thai Witness in a California Murder Trial! 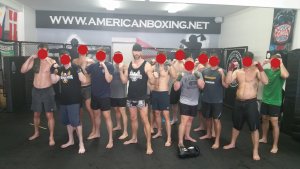 SEAL Team 1 training with Kru Dave at American Boxing. (Faces have been removed for security purposes.)

Kru Dave has worked with a number of military Special Forces, Border Agents, FBI and other government officials to keep their hand to hand combat training up-to-date.  Dave has shown that his technical knowledge of Muay Thai and Grappling allow him to marry his real world experience and produce a superior hand to hand combat system.  Observe, Evaluate and Execute, is the process, that allows his competition and self defense students to be highly succesful.

WHAT IS YOUR FAVORITE MUAY THAI COMBINATION?

That’s easy, it was the 1st one learned and the one I used to earn my 1st IKF Muay Thai Championship Belt.  Left hook, leg kick!

HOW HAS MUAY THAI BENEFITED YOU THE MOST?

This sounds kinda cheesy, but by allowing me to help others…  I wanted to be an attorney, among other more personal reasons, to make the world a better place by having the power to affect change.  Muay Thai has actually allowed me to change the World, one person at a time. The feedback I have received over the past 2 decades has been amazing.  I have had people reach out to me years after being a student and express how I have positively effected their lives, and unless you’ve had those types of conversations with people, you just can’t imagine how good it feels.  The only thing in my life that has given me a greater sense of purpose is raising my daughter.

Also, general fitness.  I haven’t worked-out aside from surfing in probably half a decade yet I can easily keep up or typically beat any average 20 something year old, in the water or on most courts.ha  And that’s not just me, I know a lot of Thai Boxers that maintain amazing fitness levels.  And yes, I still have my “Muay Thai Abs”. haha

WHAT IS THE REASON YOU STARTED MUAY THAI?

That’s kinda funny actually.  I always wanted to try Boxing but never wanted my nose broken…it’s already big enough.ha  I remember seeing some kickboxers that were pretty good looking fellas, so, one day while I was at 24 Hour Fitness with a friend, I got a flyer for Muay Thai Kickboxing on my truck, went to the gym, tried a class and I was hooked.

WHAT ARE 5 WORDS THAT DESCRIBE YOUR TEACHING STYLE?

Technical. Intense. Sarcastic and Funny… I can’t count to 5. Lol 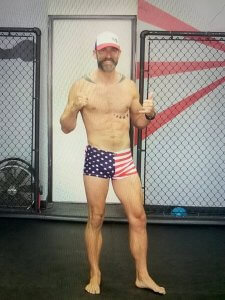 Kru Dave and his 4th of July Speedo, because “he” thinks its “funny”.

OTHER ACTIVITIES AND HOBBIES? Ready

Everything that goes along with raising my daughter, mountain biking and surfing. 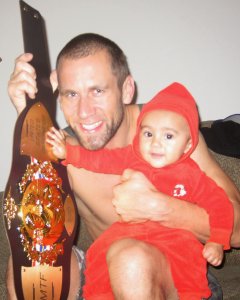